Kio, an obvious fire bender, used to have spiked blond anime hair (that never got in his eyes) he wears a flame red Gi with two Tiger hook swords on his back, split down the center by an ornate longsword. Now that he has been replaced by his alter ego, Zen, he has a shaved head and a large flame scar covering his entire chest from the fatal battle that sent him to the Spirit World.

Kio was abandoned at birth at an orphanage in the fishing town of Jang Hui Village. at a young age he left the town to adventure. Something extraordinary then happened as kio was taking refuge in a mountainous cave. A hiding high dragon came to him and foresaw a tumultuous and epic destiny in kios future, awakening in him the power of fire. he then joined the imperial army as a deadly mercenary until one fateful day he would be faced with the truth after the events that transpired at Senju Village.

Kio was killed in battle and, when brought back to life by a dark ritual, only his alter-ego returned. He calls himself Zen. 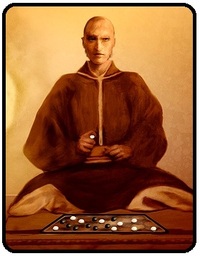